The executive director/administrator credits the 100-person staff and the people who live there with knowing what to do and doing it well. There have only been a few times when he has had to step in and make a policy change, such as with COVID-19. He is quick to say that his decisions are based upon “whatever is best for the residents.”

Cross Road opened 38 years ago in 1983. Today, it has 88 independent apartments with one and two bedrooms, eight villas and three cottages. The villas are a step above the apartments with different amenities, like granite countertops and hardwood floors. The cottages are actually small houses.

Tedder explained that Cross Road is a retirement community, complete with porches on each home, a lake, raised bed gardens, a greenhouse, two activity centers, a clubhouse and a long-term care facility for dementia and Alzheimer’s patients.

He stressed Cross Road is not a rest home, but instead a retirement community. He said so many people do not know the difference. 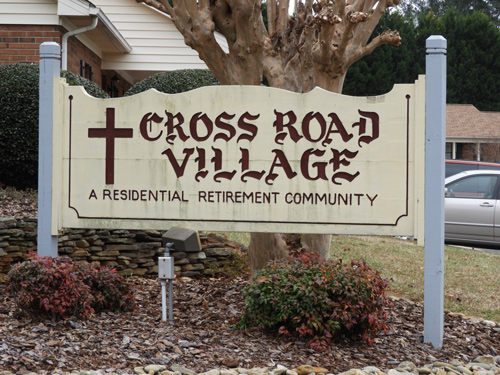 The residents are not alone. A lot of ducks, geese and two goats also live there. The feathered animals enjoy the pond and can often be seen tipping over and having their tail ends stick up out of the water. They splash, paddle and talk a lot to each other.

Unlike many other retirement communities, Cross Road is not financially subsidized and rent is not based upon income. However, the goal is to try and keep the cost economical.

Founded in 1983 by Cross Road Baptist Church, a board of directors with the church oversees the retirement community. Persons of all faiths are welcome to live there.

Tedder said that a study was commissioned 4-5 years ago to see if a taller building with apartments would be wanted by the residents. He said the responses were an overwhelming no, that everyone enjoyed living on the first floor, having a porch out front and being able to have easy access to their cars which they can park in front of their front door. People were concerned about a stuck elevator, safety and the list goes on.

So the master plan calls for an eventual expansion with one-floor buildings. He says they just have to wait for COVID-19 to go away and for the price of lumber to decrease.

Tedder is a Randolph County native, having grown up on NC 13 where he could hear the lions roar at the NC Zoo. Years ago, Bear, the zoo’s first male lion, would roar usually in the morning and then in the afternoon. People living on Panther Creek Road, Old Cox Road, NC 13 and some other country roads could hear him. His voice really traveled.

During some of that time, he served on the retirement center’s board of directors. He was then asked to be president of the board. Later, the position of the director of the Memory Care Center opened and he was asked to take that job.

He had family members at Cross Road and was there often. He had learned quite a bit about the ins and outs of the facility. So when the  former administrator Steve Rumbley retired, Tedder was asked to take his job. He has been in that role now for a little more than a year.

He still lives nearby and, yes, can still hear the lions roar.

His print and marketing background, along with the business administration degree he earned from Randolph Community College, have given him a strong foundation to work with the staff on a 24/7 schedule.

Tedder puts out a quarterly newsletter and was actually sitting in his office writing it on Christmas Day. He looked outside and saw two residents dressed up as Santa Claus and Mrs. Claus going door to door to wish people well and give them a treat. Tedder and a couple of other employees had been dressed as elves prior to the Claus visits. He said everyone had a good time.

When asked what the future for Cross Road is, Tedder said there are too many factors to say. There are variables that must be addressed when talking about future growth. The world is changing daily.

He said a lot of people do not want to go to a retirement center, opting to stay at home for as long as they can. However, Cross Road fills a niche with a valuable service to caregivers — a respite program where non-residents can go for a day.
Last week, the state performed its annual survey, something that is supposed to be done every year. He said it had been 4 1/2 years since the state had come in to check things out. He was pleased they found no deficiencies.

The new Asheboro Sportsplex will be located across Old Cox Road from the retirement center. Tedder is hoping that residents will capitalize upon it.

“I hope it gives our residents a place to walk their dogs, get exercise and see a ballgame,” he said. “With the opening of the bypass, the zoo vehicle traffic is gone, although we own 7 1/2 acres on the other side of it. The bypass went straight through our property. We are still adjusting to that (and the noise).

“With the reduced traffic and the new park, we hope things work out well for us,” he said.