Citizens of the Year

Citizens of the Year honorees, brothers Chris and Neal Griffin, and, indeed, the entire Griffin family, were the subjects in an unprecedented story of triumph and tragedy. The 2020 awardee, Angie Orth, explained how events played out.

Orth said the past Citizens of the Year met in December and unanimously selected the Griffin brothers, founders of Advisors Financial Center, to be recognized with Randolph County’s top honor.

She said the plaques have been at the Chamber office since early January and the intention was to recognize them and the other award winners at the annual dinner on Jan. 28. However, the event was postponed due to the high COVID rate at the time.

Then the unthinkable occurred. “On Feb. 5, our community woke up to the stunning and heartbreaking news that Chris Griffin had unexpectedly passed away the night before,” Orth said. “We notified the Griffin family that Chris and Neal had been selected as the 2021 Citizens of the Year earlier in December. We wanted them to know this honor was not something that came as a result of Chris’ death, but rather it had been a very intentional choice with a pure desire to recognize two very special men that — individually and together — have contributed to make our community a great one. That their actions and the way they demonstrate love for family and community has been inspiring to others. That we all know our community is much richer thanks to them.”

Neal Griffin and other family members then approached the podium. Neal had a prepared speech which he read.

In part, he said, “I’m extremely humbled and honored to receive this. … I’ve never been in a community that worked together and loved together so well as this community. I’m thankful for our faith, foremost, in God, who shows that loving and helping is the best way.”

Griffin thanked the mentors in the lives of himself and Chris, including their parents, Neal and Libby Griffin, and others in their family. He also credited Bill and Ann Hoover and JB and Claire Davis while saying that he could go around the room and find others at almost every table that influenced them.

“But the best part about being Citizens of the Year is … that I’m receiving this for Chris who I love with all my heart. … I’m blessed to be a part of this, to get to honor him, my favorite person I’ve ever met.

“Chris is now sending blessings our way from heaven above. His reward is better than this one.

The 2021 winner, Susan Hayes, was slow to make her way to the podium.

“The blood just drained from my body,” she said. “I can’t believe this. I’m so honored and appreciative to be in an amazing company. Thank you.”

In announcing the winner, Orth had explained why Hayes, recently retired director of Randolph County Public Health, was chosen.

“I can tell you from personal experience, Susan Hayes did a tremendous job with the county’s response to the COVID-19 pandemic,” Orth said. “She partnered with Randolph Health to establish the drive-thru COVID vaccination clinics held at the North Carolina Zoo. Susan also initiated the Randolph County Opioid Collaborative in 2017 to address the growing opioid epidemic in Randolph County,” as well as other programs she enhanced during her time as director.

Volunteer of the Year

Brad Crumpler, Volunteer of the Year, was in Singapore with his wife Jane, visiting their daughter’s family. He had sent his thoughts to be read by Baxter Hammer, the previous winner.

Hammer first reviewed why Crumpler was chosen for the award, saying he has served as Chamber treasurer since 2017, bringing the organization’s finances to accounting’s highest standards.

“But most critically,” Hammer said, “during the COVID pandemic, Brad met with (Chamber officers and staff) on a weekly basis to review the cash flow report. That time and effort and leadership has resulted in our Chamber safely surviving COVID with a positive cash balance and no debt.”

Crumpler had written, “I am truly honored and humbled to be recognized with this prestigious award. … Gifts of personal time are special, and one of the highlights of my life is having served with many gifted community leaders donating their time. …

“Thanks again for this award and I’ll do my best to continue serving where needed.” 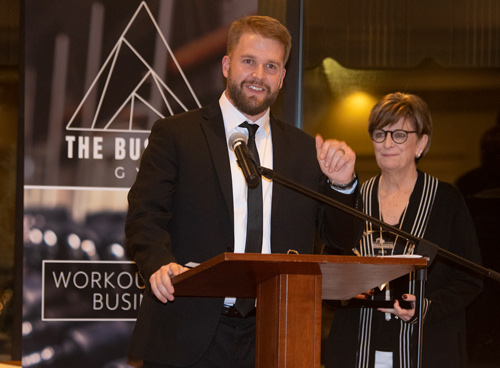 “This year’s Emerging Leader is passionate about youth and spending quality time outdoors,” Craven said. He went on to say that Britton, in his five years at Mt. Shepherd, “has led his organization to nearly a 50-percent increase in Randolph County children served.” During the pandemic restrictions, Britton “was determined to find alternative ways for children in the community to get out of their homes,” developing a modified day camp in the summer of 2020, extending it into the fall when school was online.

Britton told the audience that on his first day at Mt. Shepherd, he realized there were serious financial problems. When a letter came in from a law firm, “I was afraid to open it” and set it aside. Later in the day, he said, he opened the envelope to find a $10,000 check from the estate of a generous person.

“The community has been so kind to me,” Britton said. “God continues to bless us. I’m excited to see what we do for children, to help them feel better about themselves. Thank you.” 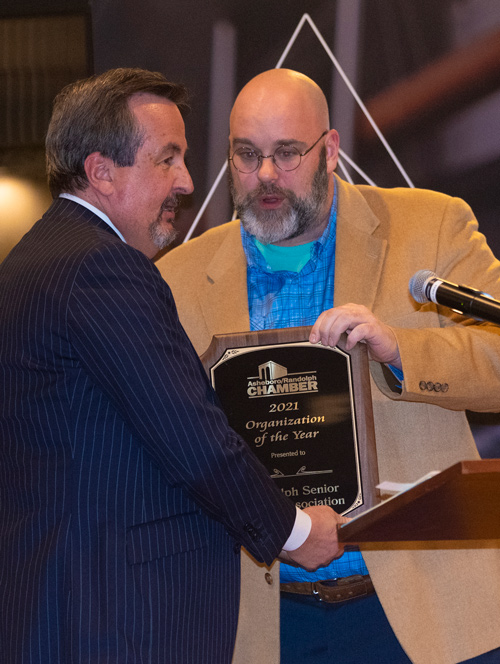 Organization of the Year

Jonathan Thill of VentureAsheboro announced that Randolph Senior Adults Association was chosen as the Organization of the Year.

Senior Adults provides more than 100,000 meals each year to people who may not have a nourishing meal otherwise. The organization also provides transportation, recreational opportunities, medical insurance counseling and income tax filing at no cost.

Mark Hensley, director of Senior Adults, said, “On behalf of Randolph Senior Adult Association and the employees, what recognition!” He praised Randolph County for the support given. Hensley also acknowledged that during the capital campaign to build the current center, 99 percent of the money pledged came in. “Thank you for your support.”

Industry of the Year

Randolph County government was honored as the Industry of the Year because, as Dorothy Keith of WKXR/WZOO explained, “They are the industry that keeps Randolph County running.”

She said that the county’s efforts “have led to multiple capital improvement projects that have enhanced Randolph County’s education, public health and emergency services. During 2021, they pledged $1.1 million in health, safety and well-being grants to organizations in our community.” The county also persevered with other organizations “to secure $12 million in Rural Stabilization Funds from the North Carolina budget that has kept our hospital open.”

Accepting for county was Darrell Frye, chair of the Board of Commissioners. “Thank you very much. This is what you elected us to do. We’re too stubborn to give up.”

Frye said the efforts of the county to attract industry, including Toyota Battery of North America, is because “we’d rather have people on the payroll than on the welfare role. A lot of folks in the county have worked on this.” 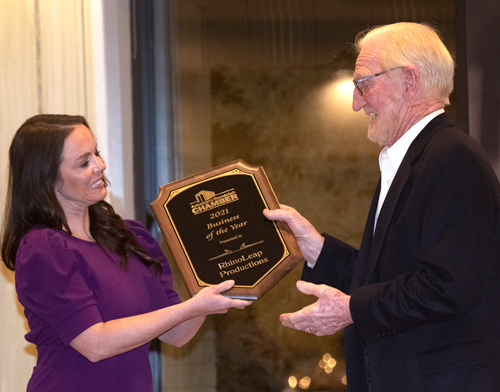 Business of the Year

RhinoLeap Productions was announced by Jenna McKenzie of McKenzie Real Estate as Business of the Year.

The company is responsible for 16 live productions during its six years of existence, using locations such as Memorial Park, Four Saints Brewing, Mill 133 and the Sunset Theatre. They also work in public schools to offset the loss of arts in the curriculum, produced commercials for local businesses and did projects for PBS-NC.

Tom Osteen, executive director, accepted the award, saying, “It’s amazing. Living and working in Asheboro gives me so much. I wish I could say I’m giving it back.

“We’re here because the community is an amazing place to live. People need to know that. I’m honored to accept this for my staff. Thank all of you.”