A big one presented itself Saturday afternoon at Burlington Athletic Stadium. Could the Tigers handle it? Yes … and then some.

The Tigers pummeled Whiteville for 19 hits and overcame a surprising early deficit to post a resounding 12-5 win in Game 2 of the best-of-three 2-A state championship series.

That win gave the Tigers a sweep of the series and their second straight state championship. Randleman had taken Game 1 on Friday 10-0 behind a no-hitter from sophomore ace Drake Purvis.

“Special for these kids,” Randleman coach Jake Smith said. “Randleman Tiger Nation. They put in the work and deserve everything 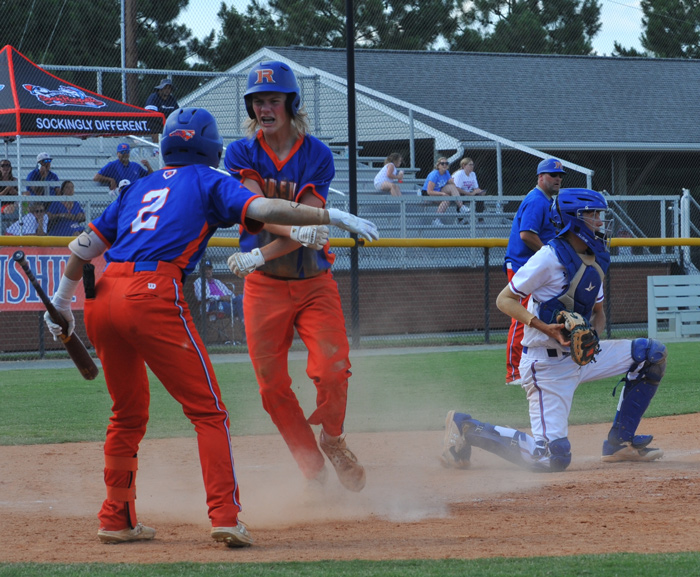 they get. It’s a wonderful group of kids. They worked hard to get here. I’m so proud of them.”

The Tigers (33-1) set a state record for wins in a season, one of nine team or individual state records set by the Tigers.
It was the third state championship for Randleman as a program.

Randleman tied a state record for 370 hits in a season.

“Randleman hits, baby,” Brannon said. “We hit. We pound it.”

At first, it was the Tigers and White who got pounded.

White, the left-hander bound for Western Carolina, got rocked by three doubles in the first inning as the Wolfpack stormed to a 3-0 lead. Keep in mind that those were the first runs surrendered by the Tigers in the playoffs. They had crafted seven straight shutouts.

And White had allowed two earned runs all season.

“I knew they were a good team and they came out swinging,” White said. “I adjusted to it, got my pitches in the zone, battled and fought my way through it.”

White ended hurling a complete game, allowing six hits while striking out eight and walking four. He also hit four batters.
At one point in the early going, Smith made a mound visit.

“I told him to relax,” Smith said. “He was trying to do too much early on. He settled in. He didn’t have his best stuff today. He’ll tell you that. But he competed and got done what he needed to.”

While the 3-0 hole was a real smack to the chin, the Tigers were in the midst of perhaps the greatest offensive season by a North Carolina high school team. Their confidence was high and, ironically, fueled by their only loss of the year, to South Carolina team Catawba Ridge in a tournament.

“We had that loss in Charleston and it was hard,” Brannon said. “As a team we vowed we would never feel that way again. We were going to keep getting hits, keep grinding, keep going after it.”

Brannon’s two-run triple off Whiteville’s UNC-W-bound ace Ty Lawson was the beginning of a five-run rally in the third. For a moment, it looked like it might be Brannon’s 21st homer of the year, which would have broken the record he now shares with his father, Paul Brannon. But it was the catalyst.

Moments later, Seth Way lashed a two-run single to give Randleman a 4-3 lead.

“I had been struggling lately, so I was looking for something to drive,” said Way, the younger brother of Virginia Tech-bound Trey Way. “I wanted to do some damage.”

White’s run-scoring single made it 5-3.

The Wolfpack got a run back in the bottom of the third on Sam Inman’s RBI single.

Randleman expanded its lead to 6-4 in the fourth when Brannon singled in a run. It was his fourth RBI of the series.

The Tigers busted it wide open with six runs in the sixth inning. Shelton’s three-run double was the key blow and it was a medium deep pop fly that fell between two fielders.

“It’s just an approach,” Seth Way said. “We work hard from September all the way to now. That’s what we do.”

It was all over when second baseman Kaden Ethier caught the final out, leading to a joyous dogpile at the mound.
Everything was set in motion the night before when Purvis dominated the Wolfpack with 12 strikeouts in the five-inning game.

“My fastball was getting in the zone,” Purvis said. “Curveball was working well.”

Purvis struck out 12 and walked one batter.

Trey Way, Sweatt and Ethier all drove in two runs to back Purvis.

“Oh it’s amazing to have that many records,” White said. “Not too many teams can say they did that in one season.”
And they don’t intend to stop.